THE STORY OF AN ALL-ITALIAN MASTERPIECE: GRAPPA

THE STORY OF AN ALL-ITALIAN MASTERPIECE: GRAPPA

Whether as a child, watching your grandfather drinking it after dinner, or in the mountains, when you found yourself in the middle of a gathering of Alpine soldiers, your encounter with grappa has certainly not left you indifferent. Because when it's cold and the temperatures plunge, it's customary to have a small glass, just to 'warm up'. Or burn, depending on your point of view. But there is no lack of creativity in Italy, so much so that it is increasingly easy to find grappa in both savoury and sweet recipes (for example, have you ever tried Barolo grappa pralines?).

Grappa is defined as a grape marc spirit distilled exclusively in Italy. This means that the seeds and skins of the grapes (the marc) must come from grapes grown and vinified in our country.

But how is it produced? And where was it born? Here are the answers to all your questions about this incredible spirit. And at the end you'll see, the first thing you'll do is go and fill your glass...

Exactly when man began to produce Grappa is difficult to determine; sources seem to show a distillation of marc as early as between 1300 and 1400, but perhaps even earlier. In any case, what is certain is that in the beginning, it was a popular drink for the less wealthy classes: the nobles tended to drink wine, leaving the 'waste' (skins, seeds, stalks) to them. The result was a completely different spirit from the one we know today – much drier, more fiery and often with a pungent, unpleasant taste. It was with the First World War that Grappa finally took its place on the stage, when it was used as 'liquid courage' for soldiers at the front.

But it was only after the Second World War, with the economic boom and changing tastes, that Grappa became less aggressive, softer and more elegant, thanks also to long ageing in wood.

How is it produced?

This is where there appears one of those inventions before which one cannot help but be amazed: the still. There are different types ("discontinuous cycle" for small-scale grappa production, "continuous" for industrial grappa), but what they have in common is their ability to separate the volatile parts of the fermented grape marc (alcohol, water and aromatic substances) from its solid components. In other words, distillation. Each producer can then decide whether, how much and where to age their Grappa, and then filter and bottle it. 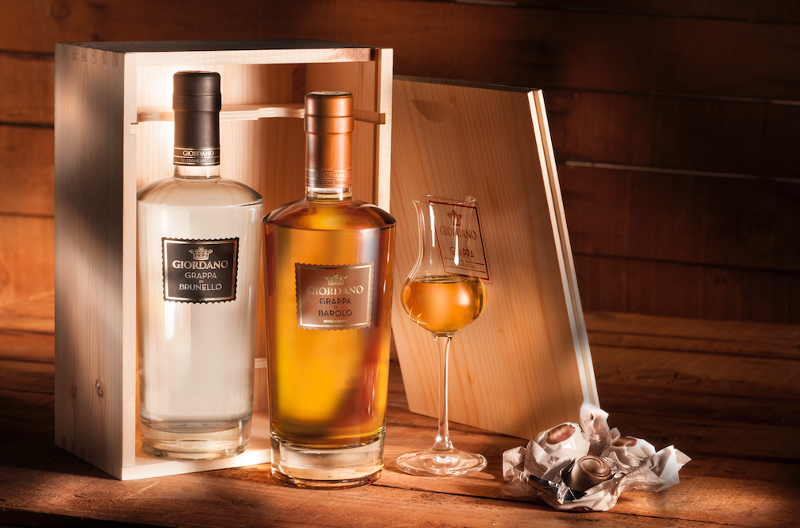 Young, flavoured, matured in wood (or barrel), aged and reserve. These are the main categories for classifying a grappa. But those are not the only criteria; for example, it is possible to distinguish single-variety types from those made from the marc of several different grape varieties. One of the most famous is certainly Grappa di Brunello, made from the marc of Sangiovese, one of Italy's most prized grape varieties. While this has a smooth, rounded flavour, the same cannot be said for Grappa di Barolo. The latter, obtained from the marc of Nebbiolo da Barolo grapes, is characterised by a drier taste, with typical aromas conferred by ageing in wood, primarily vanilla. The Grappa di Amarone is of great quality, with an intense amber colour that tempts you to taste it, and a strong but balanced flavour: only for the truly hardcore. If, on the other hand, it's smoothness you're after, then go for Grappa di Prosecco, because with its aromatic richness and fruity scents it's the right choice for those who like strong, but decidedly harmonious flavours.

In short, there are plenty of ideas to warm up the atmosphere, you just have to choose and experiment (with chocolate, for example, it's pure magic). And remember, if you like a pairing, then it's always the right one.